Green waves crash again and again
on the gray blocks of the breakwall,
A glowing orange sun sets in a hazy horizon, 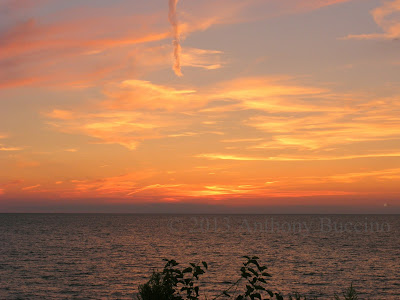 An old man in a tattered suit fishes
for two hours with two rods outfitted
with two open-face spinning reels;

He caught two sheephead
with crippled worms on bent steel
and tonight it will be his meal.

"There's other fish to catch --" he says
sucking in breaths of the sea air,
"Perch, and salmon, and great ones!"

But he's only got the two fish
at the end of a drag line
floating in stagnant water.

His dirty fingernails and dusty boots
are lonely for the other hundred people
who usually fish here on the breakwall
at night.

"It's cold -- he says in a harmless
old man's dirge.
It's beautiful, I think in a silent gaze;
The waves, the lake that ends beyond
the wide, wide horizon;

It's breezy, with the wind ripping
through the checkered shirt
and the old man is tired.

The sudsy green waves crash against
the huge gray blocks of stone.
They did it today
They'll do it tomorrow…

Discarded beer and soda pop cans,
and green slimy driftwood
All in different stages of decomposition,

Rotting fish and crusty skeletons
decorate the shallow marsh
this side of the breakwall.

The sun has set, the light grows dim,
The old tanned leather-faced fisherman
takes in his lines and leaves.

It's not his life, this lake
but it make his day…

Young long-haired people in curtained vans
And young couples in love
swallow the crisp Lake Erie breezes
Listening in half-deafness
to the rush of the waves.

Great cargo ships as long as
skyscrapers are tall
Chug west on the flat greenness
of the lake;

A yellow Bug and an M&M green Datsun
Stand quiet in the gathering darkness
of the mellow night
So full and rich with the calmest
sounds of the sea.

June 1976, Walnut Beach, Ashtabula, Ohio
- By Anthony Buccino
From DAYS YOU KNEW ME
Copyright © 2010 by Anthony Buccino, all rights reserved.
Photos and content may not be used for commercial purposes without written permission.
Posted by ARB at 8/08/2010

Email ThisBlogThis!Share to TwitterShare to FacebookShare to Pinterest
Labels: A poem a day, Anthony Buccino, DAYS YOU KNEW ME

A Buccino Poem A Day

Copyright © 2010-2020 by Anthony Buccino, all rights reserved. Photos and content may not be used for commercial purposes without written permission.

For reprint information write to

The Crow On Your Shoulder

so you grab the raven off your shoulder, twisting slightly its head one way and its body another and, damn it, you write, write write...

A Poetic View of Nutley Old and New

The poetry editors for Volume 55 of U.S. 1 Worksheets, nominated Anthony Buccino's poem At The Vet for the national Pushcart Prize.

dog tales in prose and verse

One Morning In Jersey City

VOICES ON THE BUS train, sidewalk and in my head

ARB
New Jersey writer Anthony Buccino has published many based in and around New Jersey.